×
Go to content
-
-
-
-
-
-
-
-
-
ABOUT US
__________
Service
Whether you desire a sweeping courtyard patio or a simple garden, we listen to your ideas and value your ideas. The design of your project is a collaborative process. We'll discuss your vision, define the goals of your project and advise you on the selection of materials. We can do nearly anything you envision from hardscapes, waterfalls & pools to a nearly unlimited list of unique projects; including, but not unlimited to our custom boulders. Please follow us on Facebook to see our latest projects.
Quality
Our walls, steps, patios and walkways are constructed with the beauty and durability of natural stone and provide lasting value to your property. You benefit from our extensive knowledge of materials and the installation process to achieve quality results. We take extra care in the preparation of our work to prevent cracking, moving and settling that could otherwise result from heavy spring rains and bitterly cold winters.  The same attention to detail is applied to our landscaping work, as well. 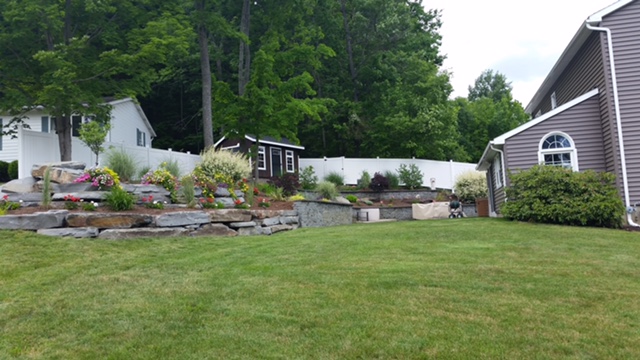 Reliability
Our focus is on quality and your satisfaction. Our crews are on time, polite and respectful of you and your property.  Rock Solid Landscaping is fully insured. 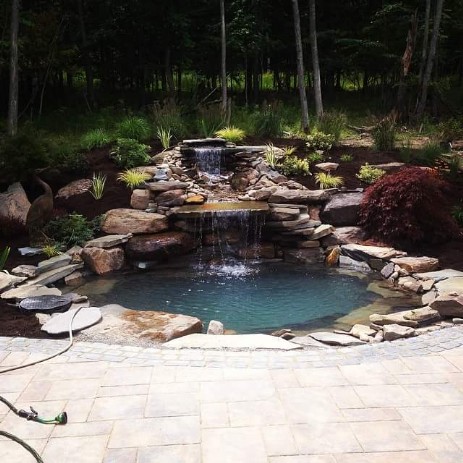 TESTIMONIALS
_____
Having built a home very recently we learned from personal experience what qualities make for a stress free relationship with anyone that is hired to do a job.

Dependable, attention to detail, innovative, flexible, willingness to do any job no matter how small, completing a job on schedule, doing what he says he will do, returning phone calls, pleasant to be around, maintaining a high level of workmanship, taking pride in what he does, assuming full responsibility for anything he or his men do.

Dave Rebello scores A+ on all of these very important qualities.

-Fred & Rae Marie
Aren’t we all looking for landscape companies that are reliable, affordable, skilled, creative, and professional to beautify our homes with expert landscaping? These are the words we use to describe Rock Solid Landscaping and its owner, David Rebello.

We moved into our new lake home in October, 2007. The home is situated several hundred feet above the lake, with a steep slope from the house to the lake. The upper “steps” of the climb closest to the house consisted of rock ledges, some of which were coming loose. This made the descent to the lake potentially dangerous. Mr. Rebello’s company was recommended to us by friends, and we called him for an estimate to replace the rock ledge steps.

He came to the house when he said he would, and, after looking at the problem, immediately recommended using Pennsylvania Bluestone to build the new steps.

We also asked him to build a railing on the downhill side of the new steps. He invited us to look at the work he had done at other homes, and we liked what we saw. He gave us an estimate which we felt was very fair, and proceeded to do the work as promised and on time.

The finished product is not only safe, functional, and attractive, but it fits in beautifully with the natural landscape. The railing, which he built from ash tree limbs, is beautifully rustic and also functional.

We’ve received many compliments on his work from friends and visitors on the quality of the work and the beauty. In fact, one of our friends so admired his work at our lake house that they hired him to do some extensive work on their lake property. They are extremely satisfied with the quality of his work.

We will be hiring Rock Solid Landscaping to extend the Bluestone steps to lake level in the fall of 2009. We have also asked for an estimate on other landscaping.

We are extremely satisfied with the quality and beauty of Dave’s work, and would recommend him without hesitation to anyone with landscaping needs.